Every new beginning comes from some other beginning’s end.

Yesterday was my last scheduled shift as a NICU nurse.

For the past twenty years, the NICU was my professional “home”.  I never intended it to be…when I was in college, I wanted to be a Labor and Delivery nurse. That, I believed, was where I was meant to be. My clinical rotation in L&D was so exciting and wonderful and adrenaline-filled. New life coming into this world-it was a mostly joyous occasion filled with celebrations. It was hard to comprehend in those moments just before the birth that there was going to be another person entering the world who was created from just two separate cells 9 months before. One minute they are not there, and then one minute later~Boom! There’s another person on this planet.

But I couldn’t find a job in L&D after graduation in the mid 1990s. Everyone wanted “experience” and I didn’t have that yet. I was just a brand-spanking-new- idealistic nurse.

I was offered a job on a Medical-Surgical floor, so I took it. I had to gain nursing experience while waiting for that L&D opportunity to open up.

Yeah, needless to say, that wasn’t my cup of tea. Back in those days, we had nine patients each with one nurse’s aid for the whole floor to help out. I felt like all I did was hand out medications and change bed linens. I didn’t feel like I was ever making a difference in their lives. I never felt like I was making their lives a little easier, a little less scarier, a little more comfortable…who had the time to do that when there was blood to be hung, peritoneal dialysis to do on four different patients, medications to be handed out, charting to complete? I often left in tears because this career that I had worked and studied so hard to join was not what I had envisioned AT ALL.

And then a new couple moved into the apartment below me. The girl was a NICU nurse at a different hospital and said they had a few positions open and that I should apply. I had spent a day or two in the NICU in college during my Mother/Baby rotation, but it hadn’t interested me at the time because it looked so scary.  Truthfully, I was so unhappy at the current job that I did apply and got the job. I thought it would be another stepping stone to finding a job in L&D.

This “stepping stone” job became my passion, my love, my vocation, my “calling”. I remember walking into that NICU on my first day so full of nervousness, excitement, apprehension and fear. I had never even really changed a baby’s diaper before and now I was going to learn how to help a 500 gram, 24 week gestation infant live?

But I had wonderful nurses there to show me the way. They became my second family, my mentors, the nurses I wanted to imitate, to be like. They shared their knowledge, skills and “tricks of the trade.” After months of orientation, I was on my own.

But not really. If you work in a good environment, you are never really “on your own”.  There is always someone to refer to, to ask questions, to offer nursing advice, to save you from drowning during your shift. Everyone is there with one goal~to take care of the babies and their families as they go through such a difficult time.

And as time went on, I gained confidence and started loving it.

Every part of it.

Seeing a family develop right before your very eyes, tentative at first because of all the uncertainty, but with time becoming more confident…

Having a part in something greater than anything I could explain…

I loved all of it.

But in the past two years, I have felt a new calling, a new passion, a new love that I would like to pursue.

I have taken a much greater interest in helping new moms and babies learn how to breastfeed. Again, this was not something I ever envisioned of myself doing as a career in the beginning, but now I do. Funny how things change and evolve, isn’t it? At first I tried to ignore it because I felt “safe” being a NICU nurse. It’s what I have always known.

But more and more I found myself enjoying this aspect of NICU nursing the most. I started reading more about becoming a Lactation Consultant. I took a week long course that earned me the title of  “Certified Lactation Specialist”.  I prayed long and hard over what to do, where my next step should be.

Yes! This is a big change for me. Sometimes I feel like I am standing on the edge of a cliff about to jump off and I don’t know if there’s a safety net there.

But I’m more afraid NOT to try.

A few weeks ago, I found this guy sitting on my couch…

It was exactly –17 degrees outside that day in the middle of February, but this guy was on my couch. How he got there, I have no idea.

But he symbolizes change to me. Beautiful change.

I had gotten an email from a recruiter on Linked-in. Out of the blue. He had seen my qualifications on the site and referred me to a position that was opening up. I forwarded my email to his contact. They called me in for an interview and I went and did my best. I was very impressed with the leadership team and really wanted the job! They called me for a second interview, a peer interview.  I was really nervous, but was myself and tried to let my passion show through.

In the end, they are awesome enough to give me a shot at working in the Lactation Department. I truly can’t wait to start.

When I was leaving the new hospital after getting my new I.D. badge picture taken, I passed by their outdoor atrium and spotted this…

I had to take a picture of it.

I am excited to take on this new adventure, I am sad to leave the old one behind. I am thrilled I will still be able to work with mothers and babies, just in a different capacity. I will never forget how truly blessed I am.

I’m having a hard time completing my daily assignments.

Between all the real world stuff I have to accomplish on a daily basis, I’m finding it difficult to find the time to invest into my blog. I’m hoping I could catch up this weekend, but it looks like this might be a hard task to accomplish.

Case in point…Right now I have a group of 10-11 year old boys in my basement celebrating my youngest’s birthday with a sleepover.

My husband and older son are away at a hockey tournament and I am home to organize the chaos.

Assignment #9: Be Inspired by the Neighbors

This follows Assignment #8 which is to Be a Good Neighbor. To be a good blog neighbor, the task was to comment of 4 blogs you’ve never commented on before.

I did that assignment, but couldn’t remember which four blogs I had commented on! (Oh my gosh! I can hardly remember where I put my car keys!) Luckily, I found my comments by scrolling through my history on WordPress.

The post is about Ebola volunteers in West Africa and how deserving it was that they were named Time Magazine’s Person of the Year.

In my twenty years as a Registered Nurse, I have been pooped on, peed on and vomited on too many times to count…

I’ve been harassed, teased, punched by a detoxing drunk, cursed at, yelled at and shouted at…

Most days I scarf down my food during my break and sometimes I have to wait an ungodly amount of time to go to the bathroom.

I continue to do all this because I really love being a a nurse. With all the bad that goes along with this profession, there is so much more good that comes out of it. I really feel I am contributing something to this world. I truly feel I am happiest when I am serving others.

However, with all my good intentions, I would never volunteer to work with Ebola patients. Is that selfish of me? Whether it is or isn’t, I really don’t care. I just wouldn’t do it…I have a husband and children who I love very much and who love me back. I’m not willing to sacrifice like that.

It reminds me of how I feel about the firefighters who lost their lives on 9/11…Knowing you just might not make it out, that you might not ever see your family again, that your wife might be a widow, your children fatherless…What gave them the courage to go in and try to help? I can’t even fathom it. Truthfully, I would’ve ran the other way.

Which is why I hold in highest regards those that do this kind of work. They are really a special and unique breed of people who have far more courage and internal fortitude than most of the rest of the human race. I admire them but I also ask myself, “Are they crazy?”

Most of all, I am truly and immensely thankful for people like this who are nothing short of Heroic.

I don’t think I ever mentioned that here before.

Today seems like a fitting day because it’s the anniversary of my grandfather’s death and he assisted me tremendously by helping to finance my education. I wouldn’t have been able to do it without his help.  I am so very thankful for that. 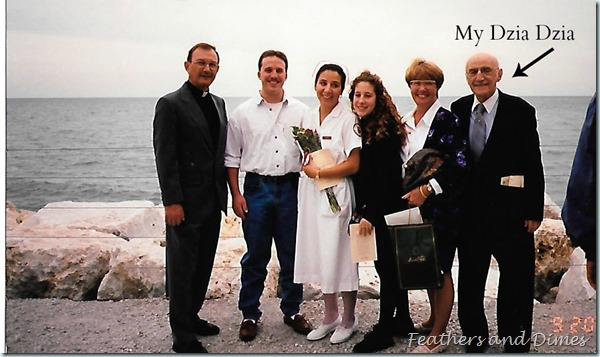 I graduated from Loyola University in 1994, so that means this May I will have been a nurse for 20 years…

My first year out of college I worked on a Medical-Surgical unit.

The past 18 years have been spent in the NICU.  I’ve been blessed in loving what I do. 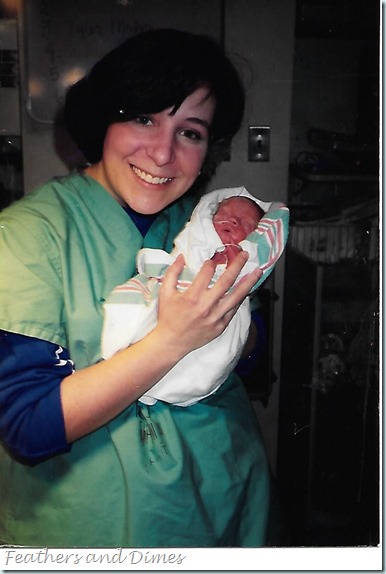 In 1997, I wrote an essay for Nurse’s Day.  The theme was “Nurses Have the Courage to Care”.  I was a young, ideological nurse.  But what I wrote, still holds true today.

The Courage to Care

Many people ask, “Why would anyone want to be a nurse?” Nurses are, by nature, a caring group of individuals…it is what calls us to this profession. That is the easy part. The hard part is that it
takes a tremendous amount of courage to care for others and give of your self unselfishly and to do what nurses do day after day.

Nurses are the soldiers at the forefront of it all. We are there when life begins and we are there when it ends. We open our hearts to our patients and their families and they forever become a part of us. We see miracles and heartbreak every day, we are in the middle of it, we are real, we are involved. For our patients, we hear their fears, we feel the struggles, and we can taste their pain. We see the best of human nature and the worst. We save lives every day; we grieve over the losses and triumph over the victories. Sometimes we leave our job in tears yet we still keep coming back. No other profession could ask so much of its participants, but nurses, they give of themselves courageously.

I wish to celebrate all nurses for all their strength to care and the courage to keep giving of themselves to their patients and their profession. And when people ask, “How could nurses do what they do?” The answer is simple: they have the courage to care.  Copyright 1997

Thank you Dzia Dzia!  See you on the other side!